The Basics of VoIP for Your Hotel, Part 1 of 3 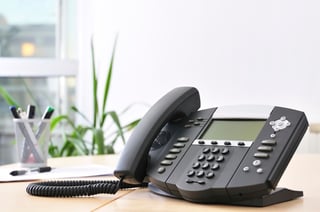 As a successful hotelier, you want to make decisions for your business that will enable you to grow and thrive. This often means having the ability to accept and adapt to changing technologies. For those in the hospitality industry, the most important technology to understand and embrace is Voice over Internet Protocol (VoIP telephony).

Before you can make the decision to ditch the landlines which have served you so well throughout the years, however, you need to know what you're getting into, and why you should be interested to begin with. To address the many inquiries and concerns that have been presented to us by interested parties like yourself, we've put together this 3-part series on the basics of VoIP -- what it is, how it works, its reliability, and how it differs from your existing communications systems. Let's get started!

You can't get more basic than this, can you? VoIP telephony takes your hotel's communications capabilities to the next level. Sometimes referred to as IP Telephony, Voice over Internet Protocol works to channel both voice calls and voice data through several networks including IP networks, Local Area Networks (LANs), and the Internet.  How does that work, exactly? In a nutshell, your analog voice is converted into digital packets. These packets then harness the power of IP in order to be transmitted across the network to an end destination.

VoIP phone systems work by connecting to a user's LAN, employing this as the backbone of the system. After VoIP phones and VoIP service providers have been connected to the VoIP PBX, it's common for HD IP phones to be utilized for communications purposes. IP technology is utilized in order to manage call control and connections. While VoIP systems obviously use VoIP and are connected to an LAN, the majority of systems are also capable of connecting directly to Publicly Switched Telephone Networks (PSTNs), thus providing users with the ability to count on both VoIP and the PSTN for calls.

VoIP has continuously evolved and improved with continuous increases to bandwidth. As a result, telephony as we know it has forever been changed. For one thing, VoIP offers users some considerable cost savings as, for the most part, calls are free. Secondly, it is responsible for sparking the idea that all office communications could and should be unified. Instead of being simply able to talk, users have the ability to integrate chat and instant messaging, conferencing, faxing, and a lot more.

What are VoIP Protocols and Codecs?

VoIP protocols work to determine the way in which a voice packet is transported across a given network. You'll find that VoIP phones typically only support one protocol. Of the different types of protocols, for example, SIP (Session Initiation Protocol) is one of the most popular.  Nearly all VoIP phone systems and services support this particular protocol. Other protocols might include H.323 protocols suite, MGCP, MEGACO, SGCP, SKINNY (SCCP), RTP, RTCP, etc.

Unlike protocols, VoIP phones usually support multiple voice codecs. Voice codecs are tasked with the responsibility of converting a user's analog voice stream into the digital packet discussed above. In addition to this, voice codecs also have the ability to make determinations about the sound quality and bandwidth requirements for the transmission of a digital packet. Common codecs include GSM, iLBC, G.711, G.722, G.726, G.728, and G.729.

By now, you've got a few of the basics down. At the very least, you have a better understanding of what VoIP actually is. This is a great start, but there's a lot more to learn before you can make the decision to introduce the technology to your hotel. Tune in next week to learn more about the quality of VoIP and how it stands apart from your existing PSTN. In the meantime, feel free to reach out to PhoneSuite for more information on VoIP telephony.
Previous StoryHow Social Media Can Take Your Hotel to the Next Level
Next Story5 VoIP Security Threats to Be Aware Of